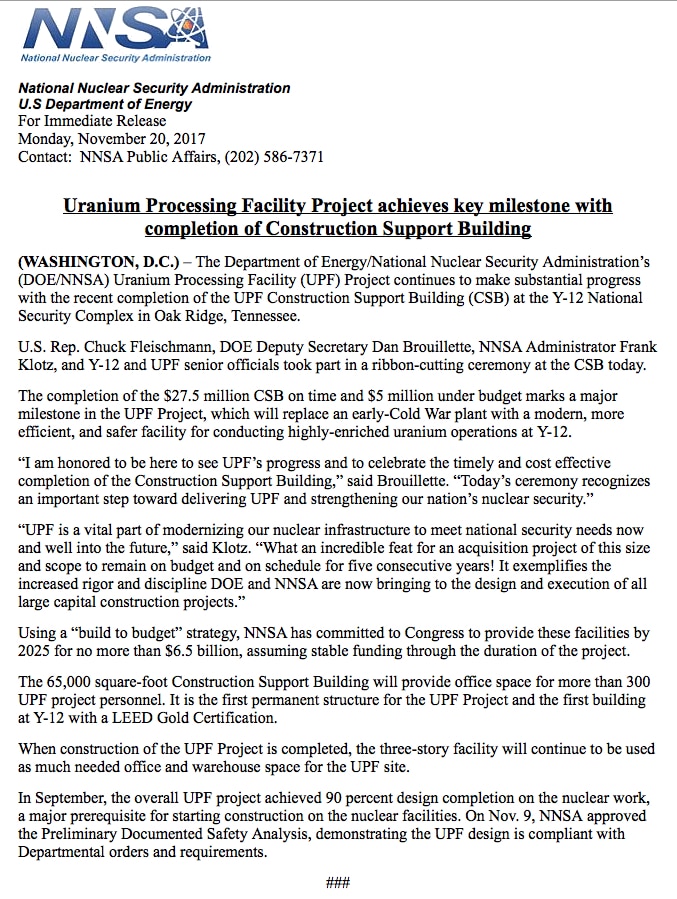 In the last paragraph of a November 20, 2017 press release from the National Nuclear Security Administration, a sentence popped out: In September, the overall UPF project achieved 90 percent design completion on the nuclear work, a major prerequisite for starting construction on the nuclear facilities.

The 90% design completion milestone for the Uranium Processing Facility bomb plant sets a short stack of dominoes in motion. NNSA can now formally approve Critical Decisions 2 and 3″usually two separate actions, but they are conflated in order to push the UPF construction through. Following that, NNSA will procure an Independent Cost Estimate”though it won’t really be independent; it will be done by another part of the Department of Energy.

The NNSA press release contained a couple of other hidden gems, including this sentence: Using a “build to budget” strategy, NNSA has committed to Congress to provide these facilities by 2025 for no more than $6.5 billion assuming stable funding for the duration of the project. That last part, “assuming stable funding” is new; it’s the beginning of the big walk back.

Since 2014 Senator Alexander has insisted that $6.5 billion is the final cap on the cost of the UPF. He has refused to provide any actual numbers about how the facility will be built for that amount, but he has approved almost $4 billion in funding already for the design of the project alone.

He also broke the project into separate pieces, taking a big chunk of the original UPF off the $6.5 billion books. In September, the Government Accountability Office estimated those wiped off costs would approach a billion dollars. We taxpayers will still pay that billion; it just won’t appear on Alexander’s UPF ledger.

OREPA challenged the Alexander/NNSA math three years ago, saying the project would likely exceed $10 billion, with the overall modernization of Y-12 (the original scope of the UPF, which included the whole ball of wax, was estimated to cost $1.5 billion) being significantly higher, perhaps as high as $15-20 billion. If you ignore the bookkeeping shell game and after-the-fact disclaimers of the NNSA, we stand by our predicitions.

The NNSA press release also quoted NNSA Administrator Frank Klotz saying it was “an incredible feat for a project of this size and scope to remain on budget and on schedule for five consecutive years.” It is truly incredible”in the sense of impossible to believe”since staff for the Senate Appropriations Energy and Water subcommittee (the committee Alexander chairs) have confirmed to OREPA that there is no budget and no schedule for the UPF project. Even Senator Alexander, while using the exact same language as Klotz, has declined to provide any numbers or timetable other than vague assurances. Instead, they have been hiding behind the NNSA’s decision not to release any numbers until they have reached the 90% design completion milestone.

So it’s put up or shut up time for the UPF project and Senator Alexander; time to release the numbers as promised for the last three years.

The press release on the UPF bomb plant is not the only nuclear weapons fiscal funny business revealed in the last month. Remember when we told you about the trillion dollar trainwreck”the plan to modernize the US nuclear weapons program over the next 30 years, starting with the UPF bomb plant and leading all the way up through new warheads and new missiles? The nonpartisan Congressional Budget Office estimated earlier this month that the number would be at least $1.2 trillion. According to the Bulletin of Atomic Scientists, if legacy costs are added in, the number leaps to $1.72 trillion!

OREPA is challenging the NNSA’s view of the nuclear future in federal court; we filed a suit to stop construction of the UPF bomb plant on July 20, 2017. The timetable for our lawsuit is uncertain (depends on some decisions by the judge) but we expect to file a “calendar” in mid-January that set a schedule for motions and decisions.

If you appreciate the work of OREPA and the information we provide, you can support us on line every day of the year”go to the donate button on the home page to contribute via a safe and secure portal. You can use paypal or any credit card.