Stop the Rush to Build the UPF 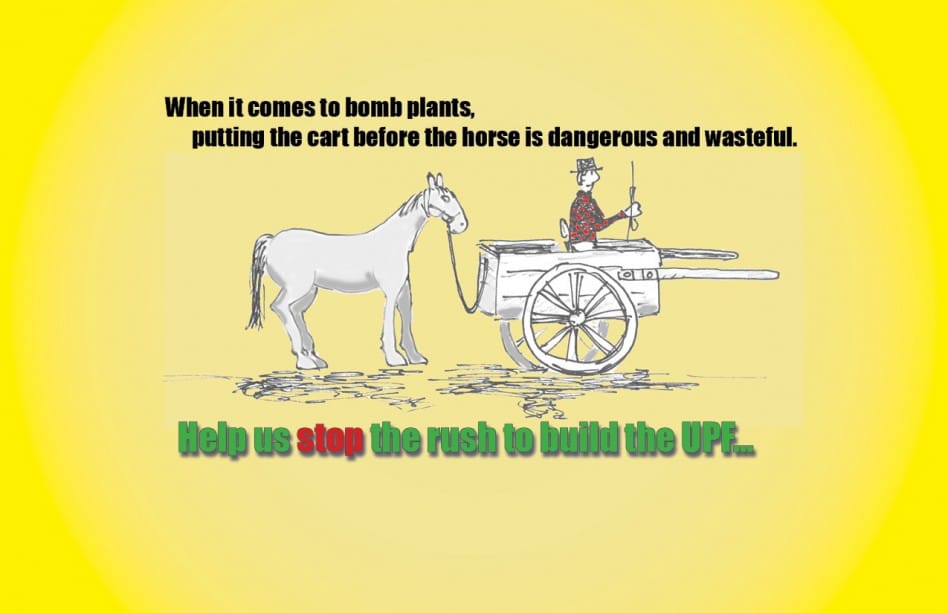 President Obama has asked for $340 million to “accelerate construction” of the Uranium Processing Facility in Oak Ridge. But several reviews show the UPF is nowhere close to being ready to build. Stopping the rush to build is the most critical thing we can do right now”and the place to do it is in Congress.

ACT NOW TO STOP CONSTRUCTION FUNDING FOR THE BOMB PLANT

THE SINGLE MOST IMPORTANT THING YOU CAN DO RIGHT NOW TO STOP THE NEW BOMB PLANT IS WRITE LETTERS.

President Obama has asked for $340 million (up from $161 million last year) to “accelerate construction” of the Uranium Processing Facility at Y12 in Oak Ridge, TN.  It’s part of the President’s FY 2013 budget which he sent to Congress in February. His budget request increases nuclear weapons spending by 11%, to $7.6 billion.

Estimates of the total cost of the UPF started at $600 million – $1.5 billion back in 2005. By last year the total pricetag was estimated at $7.5 billion by the Department of Energy and $8 billion by the Army Corps of Engineers. That’s a 1000% increase!

Despite a law that requires the Department of Energy to provide Congress with out-year cost projections on major projects, this year’s budget did not include those numbers” it just said future costs were “TBD.” TBD is an acronym for “To Be Determined,” which translated for contractors means “Blank Check.”

What else could you do with $7.6 billion?

Well, if you were into education, you could build 362 brand new schools with a pricetag of $21 million each. That’s a nice school! Or how about 126,667 more teachers at an annual payroll cost of $60,000/teacher. That’s 1,333 more teachers in every county in Tennessee!

The new bomb plant could pay for lunches for every child currently on reduced/free lunch programs for 130 years! A typical Habitat for Humanity home costs around $70,000 to build”we could built more than 100,000 of them with the bomb plant money.

Or, if you want to address Oak Ridgers’ concerns about jobs, we could consider investing in the future. Nuclear weapon production needs will continue on their downward trajectory; as a consequence, we will need additional capacity to dismantle warheads and downblend the highly enriched uranium that comes out of them. And Y12 is the place that needs to happen”so you can ask Congress to pass a budget for 2013, not 1983″fund a new dismantlement facility in Oak Ridge, not a bomb plant.

Here are key writing points for your letters:

STOP THE RUSH TO BUILD

The General Accounting Office, a non-partisan office of Congress, has issued two reports with significant implications for the UPF.

The first, in November 2010, criticized the National Nuclear Security Administration for incorporating immature technologies into the design of the UPF. At least six new technologies planned for the UPF will not have reached DOE’s own standard, Readiness Level 6, by the time construction passes the point of no return. The GAO is concerned that, should one of these technologies turn out not to work, the UPF will have to undergo extensive and expensive re-design.

A February 2012 GAO report found the NNSA lacks appropriate accounting systems to manage big construction projects. The GAO singled out the UPF as an example. The GAO recommended careful federal oversight- of NNSA’s modernization of the nuclear security enterprise saying it will be “critical to ensure that resources are spent in as an effective and efficient manner as possible.”

In April 2012, The Defense Nuclear Facilities Safety Board sent a strong letter to NNSA criticizing the failure to include fundamental safety issues in the design of the UPF. The Safety Board’s letter says NNSA is relaxing safety standards and said: “The Board has determined that safety is not adequately integrated into the design.” The Board also found the criticality safety controls NNSA is using “will not provide adequate protection for site workers and the public.”

These reports indicate a conservative approach which slows down construction (rather than accelerate it) would be prudent and responsible”it would allow for proof of technology before we irreversibly commit to it. Congress should require NNSA to resolve safety issues and to constrain runaway budgets on major projects”no more blank checks to NNSA. No more putting safety on the back burner while they rush to build.

The National Nuclear Security Administration says the new Uranium Processing Facility will have the capacity to produce 80 new thermonuclear secondaries per year. But how many do they need?

Of course, abolitionists would argue zero.

The current policy of the United States is that we are moving toward a world free of nuclear weapons, but in the meantime, “as long as there are nuclear weapons” the US will maintain its stockpile in a safe, secure, reliable form. This is called Stockpile Stewardship and Maintenance. In addition, the US is performing Life Extension Upgrades on warheads.

In its Site Wide Environmental Impact Statement, the NNSA states that it can perform its surveillance and maintenance missions, along with limited life extension operations, with a production capacity of 10 secondaries per year.

This is an excess capacity of 700%  every year.

As a practical matter, it makes no sense to overbuild the UPF to such a degree, especially when the investment in new production infrastructure is seen as provocative by the rest of the world (think Iran and North Korea).

In a world run by fiscal conservatives, you might think   this is a no-brainer: ten is cheaper than eighty.

The NNSA argues that it does not cost much more (15%, they say) to design for 80/year capacity than it would to design for 35/year. But”the NNSA does not say how much the cost differential would be between 80/year and 10/year, and even if we “only” save 15%, when the total pricetag is $8 billion”that’s $1.2 billion dollars. Before we overbuild, let’s see a true cost comparison to a “right-sized” facility.

The work the National Nuclear Security Administration claims it needs to do to maintain the nuclear stockpile and perform Life Extension Upgrades is currently being done in existing facilities in Oak Ridge. But they are old”hence, the UPF.

Still, in a time when we need to tighten every belt we can, it seems the NNSA is shopping for new pants”with a wider waist.

In 2008, the NNSA prepared a Ten Year Plan for the Y12 complex in Oak Ridge, and in that plan it says it can upgrade current facilities (Building 9212 is the building in question) to meet seismic, environmental, health and safety standards for around $120 million. That’s a  lot  less than $8 billion for a new bomb plant (the Army Corps of Engineers’ estimate in July 2011).

NNSA not only can upgrade the existing facilities”it is doing it. Last year $76 million was spent to upgrade utility systems and purchase and install new equipment. The upgrades are required because the UPF, originally scheduled to come on-line in 2016, will not be fully functional until 2024. By then, we will have already completed all currently scheduled Life Extension Upgrades on all exisiting nuclear warheads in the US stockpile.

Yes, you read that right.  We are paying twice for the same job, and the job the UPF is being designed to do will already be done by the time it is finished. NNSA says they will need to do additional Life Extension Upgrades, in perpetuity, on the thermonuclear secondaries at Y12.

We say”before we spend $8 billion, let’s have an independent study of secondary lifetimes”when a comparable study was done several years ago on the plutonium pits, the JASON report found NNSA was wrong when it said the pits had a life expectancy of 40 year. It was at least 85 years, said the JASON, and probably longer.

Let’s also have”before we spend $8 billion” a real accounting of the condition of Building 9212 and the cost to upgrade portions of it (the operations can be dramatically downsized to meet future needs) to meet codes.

Our current nuclear policy is to move to a world free of nuclear weapons. The START Treaty calls for reductions in the stockpile, and the President has promised further deep cuts in the stockpile. Even those experts who think the United States needs a nuclear deterrent agree it takes far fewer than 1500 warheads. If you graph the future of weapons production, it is a line with a downward trajectory.

The President also promised to maintain the stockpile safely and securely while the US moves to zero. We may not like it, but that’s the current policy. So if Congress is aligning spending with policy, it will not fund major investments in huge, oversized production facilities.

Every retired nuclear warhead has to be dismantled, and the US lacks the capacity to dismantle all the warheads we have”there is a 15 year backlog at Y12 in Oak Ridge of retired secondaries awaiting dismantlement. This year’s budget cuts dismantlement funding again, to $56 million, which is probably less than the Department of Energy spends on office supplies. We need to expand dismantlement capacity and increase the pace of dismantlement.

We believe a fiscally responsible, forward looking budget should align with US policy. Funding for production should be reduced, not increased. And funding for dismantlement and downblending should be increased to meet current and future mission requirements.

Letter to the Editor are crucial. Mention your Senator’s name so the letter will be clipped by his/her staff and delivered to the Senator. Most papers prefer letters of 300 words or less, and you can submit them on-line through the paper’s web site.

Write your Senator, and a couple of others:

If you know three other people who might write letters, make the phone calls.

If all you can do is write a letter yourself, or call a Congressional office, do it NOW!