Report: A Safer World Is Our Right

“We declare ourselves the last generation to live in the shadow of a bomb,” they said, “We want to raise our children in a safer world, a world free of nuclear weapons.”

Mary Findley and Sarah Margaret Hutchison’s words echoed the giant multicolored banner that whipped in the wind behind them. Its words—A Safer World Is Our Right—covered the National Nuclear Security Administration’s large sign declaring the site home to the Y12 National Security Complex. 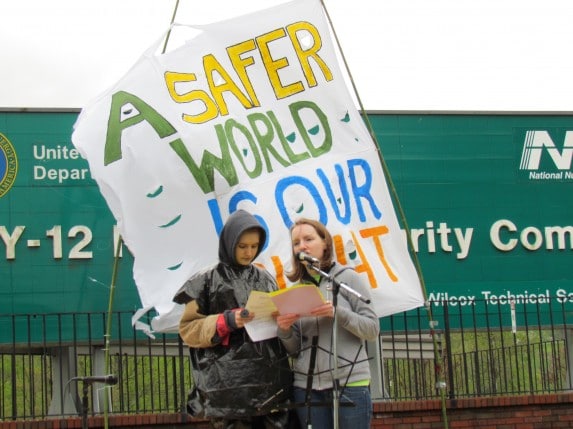 Sarah Margaret Hutchison and Mary Findley reading A Safer World Is Our Right at the Y12 Nuclear Weapons Complex in Oak Ridge, TN

Listening to them were peace demonstrators from Michigan, North Carolina, Georgia, Ohio, Kentucky, South Carolina, Alabama, Missouri, Virginia and Tennessee. “We renounce the false security of nuclear weapons, rejecting their use as a means for national defense!” declared Findley. “We can not expect foreign powers to reduce their stockpiles if we are not willing to do the same. We must set the standard,” said Hutchison.

The Youth Declaration was a centerpiece of the days’ activities which began with a gathering nearly two miles away at the Oak Ridge Civic Center—from there a march of almost two hundred moved through town, along the main highway, arriving at the main entrance to the Y12 weapons complex, where the Department of Energy continues to manufacture thermonuclear components for US warheads. The march was also the final leg of an eight-day peace pilgrimage from Asheville, North Carolina, led by the monks of Nipponzan Myohoji’s Great Smoky Mountains dojo whose drumming and chanting guided us to the bomb plant.

The early morning sunshine gave way to thick clouds and gusty winds, but the chill did not deter those who came to claim the future from the jaws of death. Roused by the music of the Emancipators and a Shakespeare mash-up from Ye Olde Puppetistas, the gathering created a spirit of hope; at the conclusion of the puppetista’s performance people rose and danced to the music of accordions.

The puppetistas theatre dissolved into dance

“The world belongs to our movement,” said Marcus Keyes from the stage, “because we offer the greatest hope—a world free of the destructive force of nuclear weapons.”

Reminding us of what was at stake, the Raging Grannies mixed the serious and the comic as they sang Armageddon, Here We Come! (While we’re waiting to be saved/ The road to hell is being paved/ The invitations are engraved/ Armageddon, here we come!)

The Raging Grannies premiered new songs for the April Action, including Armageddon, Here We Come!

The day grew more serious as Mitzi Wood-von Mizener’s sweet, powerful voice sang John Lennon’s Imagine. Those gathered came forward to sign giant copies of the Youth Declaration, then moved to the fenceline to tie peace cranes on the barbed wire and join in a guided meditation, focusing the power of our dreams and visions of a future without nuclear weapons on the Y12 weapons complex. 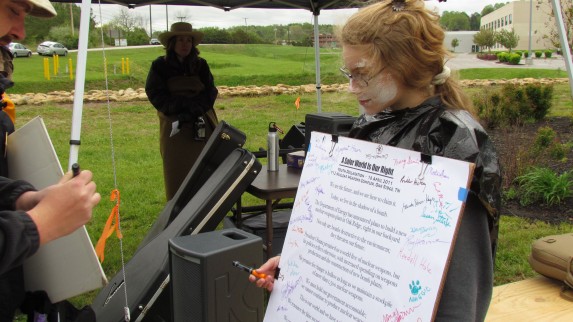 As the crowd moved from the fence into a closing circle, a siren blared, and people fell to the ground. In seconds, the scene was silent as death, bodies lying still, representing the future planned by our government and eight other nuclear weapons states. For five long minutes, the reality of our lifeless future hung in the air.

The future—according to the nuclear weapons states

The day closed in a circle, as the rains which had threatened all day began to close in. “The power we have brought here today does not dissipate as we go home,’ said OREPA coordinator Ralph Hutchison, “It goes with us. Each of us has demonstrated our deep commitment to a world free of nuclear weapons. Each of us has the power to make this dream come true.

“So we leave here today satisfied with a great day. But we don’t leave because it is over. It’s only beginning.”