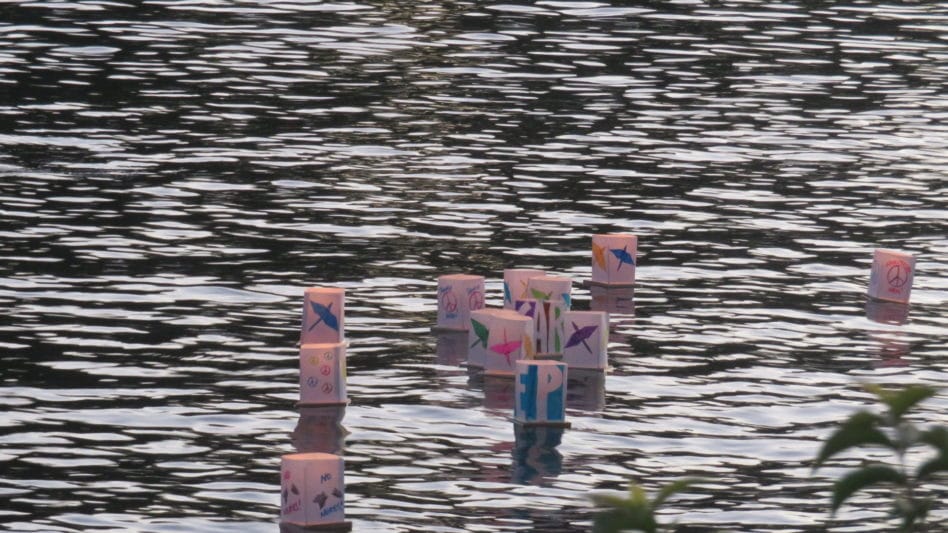 Our peace lantern ceremony was intentionally small to minimize the risk of COVID-19 which has been persistently spreading in Knoxville. But we did feel it was important to bear witness, so thirteen masked people created a wide circle at Sequoyah Hills Park to read a litany and launch peace lanterns. And we heard the following reflection:

On August 9, 1945, the United States destroyed the city of Nagasaki, Japan, with an atomic bomb the exploded at 11:02am, 1,650 feet in the air, with a force estimated at 22 thousand tons of TNT. Seventy thousand people died that day, and twice that many over the next five years.

If Hiroshima was a war crime, and given the indiscriminate and wanton taking of the lives of children, women and the elderly, it most certainly was, then Nagasaki was twice the crime. Even if one adopts the cynical and now completely debunked theory that the use of the atomic bomb shortened the war significantly, there is still no justification for Nagasaki. It was simply and criminally a raw display of force intended for a political purpose—to dissuade Russia from invading.

At Nagasaki, the bomb killed twenty-three Catholics who were praying at Urakami Cathedral when its ceiling collapsed. Statues of saints looked over the garden outside the cathedral—the heads of some were blown off; on others, the facial features were sandblasted off.

The bomb’s blast was largely contained between the mountains that surround Nagasaki. Writing home a month later, a US Navy officer wrote “The general impression, which transcends those derived from the evidence of our physical senses, is one of deadness, the absolute essence of death in the sense of finality without the hope of resurrection.”

But all was not destroyed—a remnant of people survived, the hibakusha. From the ashes of Hiroshima and Nagasaki they rose, the only firsthand witnesses to the power of a nuclear blast in human history. With almost incomprehensible courage, they have spoken again and again over these past 75 years, bearing witness, and beseeching the powers that be in the world to take the only measures possible to assure no other people suffer as they have suffered—they call for the abolition of nuclear weapons.

This year, they are especially calling on Japan and other nations to embrace the Treaty on the Prohibition of Nuclear Weapons, to sign, ratify and comply with it. That Treaty, passed in 2017 by the United Nations, has been signed by 80 nations and ratified by 43—with seven more ratifications, it will enter into force.

At the same time, the nuclear weapons states, led by the United States, have embarked on a new nuclear arms race, developing new warheads and bombs, designing new delivery vehicles, and placing the world in greater peril than at any time in our history. The Doomsday Clock is set at 100 seconds to midnight—the closest it has ever been.

So tonight we not only remember Nagasaki, but we honor the hibakusha and their plea. We take note of where we are. Not unlike the hibakusha, we have an experience that few others can claim. We gather here in Knoxville just eighteen miles from the Y-12 Nuclear Weapons Complex in Oak Ridge, Tennessee. In our backyard, the United States government is spending billions of dollars building a new facility to manufacture thermonuclear cores for the next generation of warheads and bombs. The global nuclear arms race I spoke of is not happening somewhere else—it is happening right here, in Oak Ridge.

The product of Y-12, which former Attorney General Ramsey Clark called “unlawful,” under US and international law, is nothing less than the death of the planet. The weapons being produced are an existential threat. If they are used in a nuclear exchange, the result will not only be the immediate death of tens or hundreds of millions of people, but the eventual slow starvation of all life on the planet as nuclear winter chokes out sunlight and radiation poisons our water supplies.

It is not an exaggeration, I am sorry to say, to compare the preparations for mass annihilation taking place in Oak Ridge, and at Los Alamos and Savannah River and Amarillo, to the construction of death camps in Germany and Austria during the second world war. The moral obligation to refuse to be silent, and to take action to oppose the work in Oak Ridge, is no less incumbent upon us than it was upon the people living in Germany.

Although this direct talk might make some people uncomfortable, I believe we owe the hibakusha complete honesty. That includes taking responsibility and taking action. We do not serve our neighbors nor do we serve humanity in this generation or the generations to come by being silent out of a misguided sense of politeness or decorum.