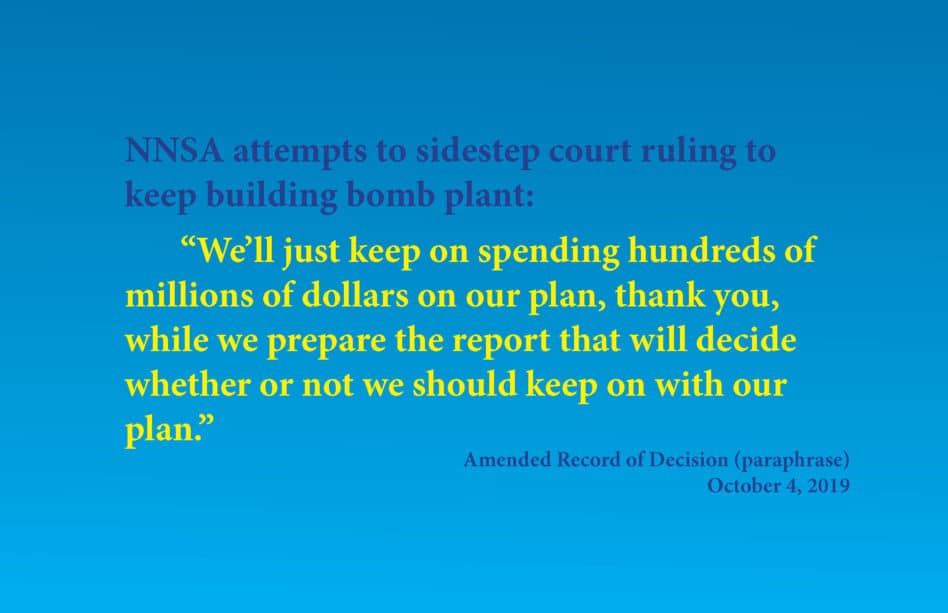 The Department of Energy’s National Nuclear Security Administration published an Amended Record of Decision in the Federal Register on Friday, October 4, 2019, announcing its decision to continue construction of the Uranium Processing Facility nuclear weapons plant in Oak Ridge, Tennessee, in an apparently calculated defiance of a federal court ruling.

US Chief District Judge Pamela Reeves ruled in a 104-page September 24, 2019, decision that the NNSA’s previous environmental analyses authorizing their enriched uranium plan”to construct a UPF and several support buildings while continuing to operate for 20-30 years in old facilities that are not in compliance with environmental regulations”failed to fully analyze earthquake risks.

Instead, NNSA has published an Amended Record of Decision declaring it will “continue to implement [its plan] on an interim basis,” while it prepares the documentation the court requires.

“The problem with this approach,” said Ralph Hutchison, coordinator of the Oak Ridge Environmental Peace Alliance, lead plaintiff in the lawsuit, “is the whole point of the environmental analysis is it is to be done before any action is taken. Its purpose is not to create paperwork, it is to make certain everything is taken into account”including the earthquake risks”before a decision is made and money is spent.

“In this case, the NNSA is saying, “˜We’re going to spend hundreds of millions of dollars on our current plan while we conduct a study to decide whether this plan is the right one or not.’ That’s clearly not what the court ordered.”

OREPA, along with Nuclear Watch New Mexico, the Natural Resources Defense Council, and four individual plaintiffs, brought suit against the NNSA because the agency, after announcing in 2011 that it would build a new, all-in-one UPF to replace aging, unsafe buildings at the Y-12 National Security Complex to house all enriched uranium operations, changed its plan.

Under the new plan, developed in 2014, NNSA wants to continue dangerous enriched uranium operations in Buildings 9215 and 9204-2E at Y-12 for 20-30 more years. The buildings are not currently in compliance with environmental and seismic codes, and NNSA has announced that they will not be brought into compliance because that would be too expensive. Instead, NNSA has adopted a policy of minimizing risk by moving some materials out of the buildings, providing safety gear to workers, and “accepting risk.”

The risk is not small”the Defense Nuclear Facilities Safety Board says the buildings would not be expected to withstand a significant earthquake and could fail catastrophically in an earthquake much smaller than a “design-basis” earthquake (the standard to which buildings should be designed).

Additionally, the Safety Board said NNSA has not been able to demonstrate that a nuclear criticality would not occur in the event of building collapse.

In 2014, the US Geological Survey published updated earthquake hazard maps for the entire United States as they do every five to eight years. The 2014 maps showed an increase in earthquake risk in East Tennessee second only to California.

Despite knowing this, NNSA chose to publish its 2016 Supplement Analysis and Record of Decision using old earthquake data. This decision precipitated the ruling by Judge Reeves.

More than $3 billion has been spent to date on the Uranium Processing Facility plan.