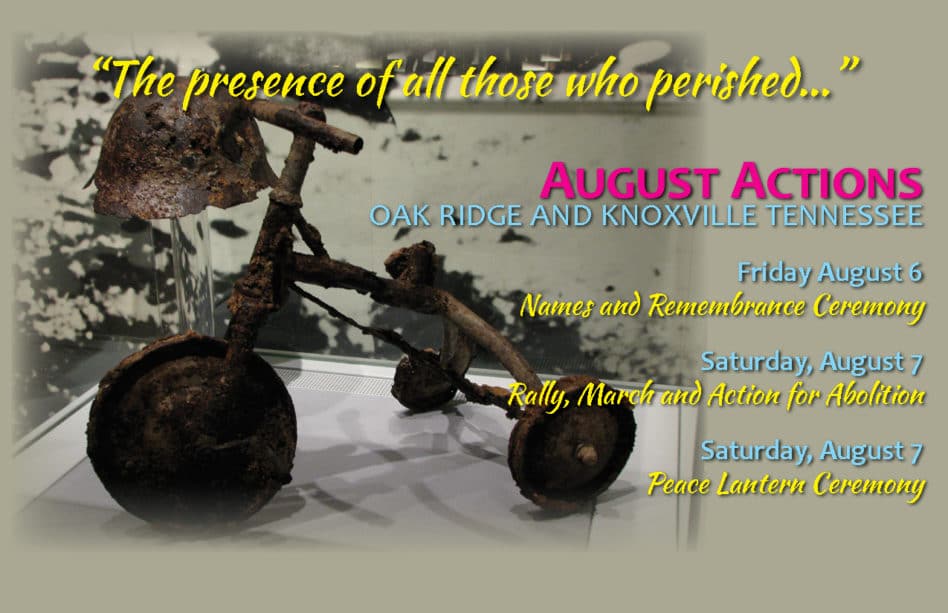 For more than seventy-five years, the dominant conversation about nuclear weapons has been about projecting military power and policies of “deterrence” and “mutually assured destruction.”

With the adoption of the Treaty on the Prohibition of Nuclear Weapons, the conversation has shifted. One hundred twenty-two nations of the world have put the nine nuclear nations on notice—the humanitarian and environmental impacts of nuclear weapons must take priority over all other concerns, and nuclear weapons must be abolished.

Shinichi Tetsutani loved to ride his tricycle. On August 6, 1945, one month shy of his fourth birthday, he was riding in front of his house when the Little Boy bomb exploded above Hiroshima, Japan. Badly burned, he died that night. His father buried his tricycle with him, hoping he could still play with it. Forty years later, when Shinichi’s remains were transferred to the family grave, the tricycle was donated to the Peace Memorial Museum in Hiroshima.

Shinichi was one of more than 60,000 people killed that day by the bomb dropped by the United States; in the months to come, another 60,000 would die, most of them suffering unimaginably from burns and radiation sickness.

In Nagasaki, the story was much the same.

Since that time, survivors of those horrific moments, hibakusha, have courageously raised their voices to insist that nuclear weapons must be abolished so they can never be used again. Pacific Islanders and victims of nuclear testing around the world echo their call — “Never again!”

Actions around the world this August — the first August since the Treaty on the Prohibition of Nuclear Weapons entered into force — will call on the nine nuclear nations to join the Treaty and will elevate the voices of the hibakusha.

In accepting the Nobel Peace Prize in 2017 on behalf of the International Campaign to Abolish Nuclear weapons, Hiroshima survivor Setsuko Thurlow invoked the presence of all those who perished. We will call on their spirits to be with us in power during our events in Oak Ridge and Knoxville on August 6 and 7 this year.

It is immoral and unconscionable that nine nations have the power to destroy life on the planet, killing billions of people and launching the long famine of nuclear winter to starve survivors. This is our inevitable future, unless nuclear weapons are abolished.

In the predawn hours of Friday, August 6, 2021, the reading will begin, with each name read, the deep peal of the bell will roll out across the grounds of the Y-12 Nuclear Weapons Complex in Oak Ridge, Tennessee.

The Names and Remembrance Ceremony takes on special significance here. Y-12 produced the highly enriched uranium fuel for the Little Boy bomb that took those lives in Hiroshima, Japan—some 60,000 in the space of seconds, and another 60,000 in the days, weeks, and months to come.

Each name read is accompanied by the tolling of the bell and the tying of a peace crane on the fence erected across from the main entrance to the bomb plant. The Hiroshima Peace Declaration will be read, along with the accounts of hibakusha, survivors who witnessed the bombing and the statements by US military leaders—General Eisenhower and Admiral Leahy, who argued against using the bomb, saying it was not necessary to end the war.

Two hours into the ceremony, silence falls—at 8:15am, marking the time of day the bomb detonated in the air over Hiroshima, the bright light followed by the thunderous noise and the searing blast that caused ceramic tile to bubble and human beings to evaporate.

You are welcome to come to be part of the Names and Remembrance Ceremony. It is a solemn event, beginning at 6:00am and ending at 9:00am.

“In the presence of all those who have perished”

The Treaty on the Prohibition of Nuclear Weapons, the voices of hibakusha, and the future will be the focus of a rally, march and action for nuclear disarmament on Saturday, August 7 in Oak Ridge.

The gathering at Alvin K. Bissell Park will begin at 10:00am, with a program slated to start at 10:30, and a walk to the Y-12 Nuclear Weapons Complex timed to get us to the bomb plant around 12:30.

At Y-12, excerpts from the Treaty on the Prohibition of Nuclear Weapons will be read, followed by an action that will include placing Yellow Xes, the international symbol of nuclear disarmament, on the fence at the main entrance to the bomb plant.

On the evening of Saturday, August 7, we will gather at 8:00pm at the west end of Sequoia Hills Park, just off the parking lot at the far west end of Cherokee Boulevard in Knoxville, for a Peace Lantern Ceremony marking the destruction of Nagasaki on August 9.

The Peace Lantern Ceremony has proven to be popular with children, so we have set the schedule to avoid having the ceremony on a school night.

The ceremony will include the reading of a Peace Litany, Japanese folk dancing, and the launching of peace cranes at dusk.