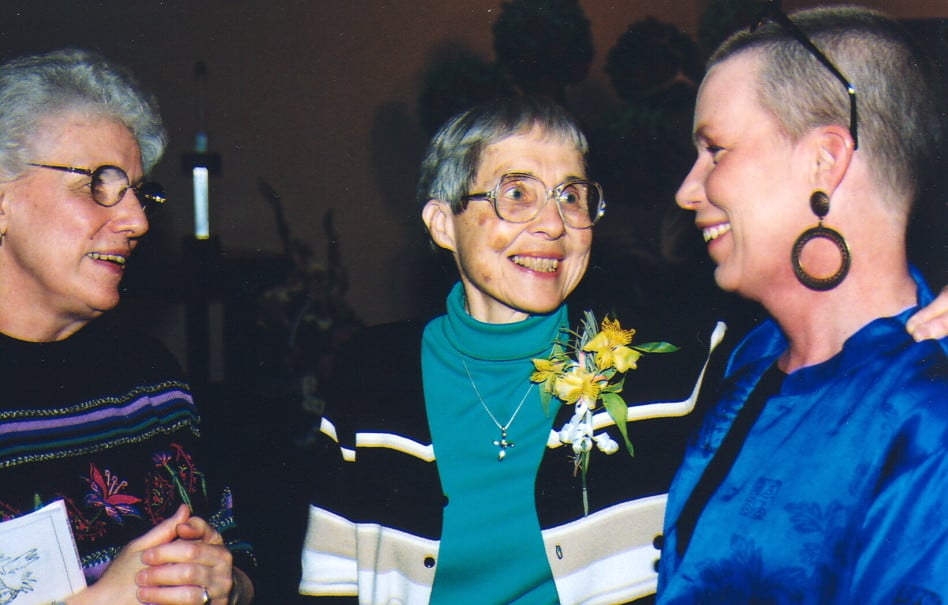 Before she returned to her Motherhouse seven years ago, Anne Hablas was ever-present in East Tennessee peace and justice activities. She came to serve in the mountains of southern Appalachia and never left. Even when she was called home to serve on her community’s leadership team, she stayed connected, and as soon as her time of service was up, she returned to work for SOCM. It was Save Our Cumberland Mountains then; now it’s Statewide Organizing for Community empowerment.

Anne’s exterior was quiet and unassuming; she was small and delicate, soft-spoken and reserved. She was also granite hard in her commitment to justice and peace. Mary Dennis tells a story of a trip to Nashville when the group was informed the Legislative Plaza was closed to the public. Anne Hablas marched up to the officer and planted her finger in his chest as she informed him the building belonged to the public”before the day was over, they were inside.

Anne began to be a presence with OREPA more than 15 years ago when we launched the Stop the Bombs campaign. In those early years, we had a series of actions scheduled and as we began planning for each one we made a list of people to approach, asking them to consider participating in a civil disobedience scenario. Anne later said she was surprised when she was asked because she had never imagined herself doing that. But after a period of discernment, in March of 1999, at the People of Faith Action, Anne crossed the blue line at the Y12 Nuclear Weapons Plant in Oak Ridge and was arrested for trespass.

It was only her first time. In the years to come, she became a recidivist resister, blocking the entrance with a banner, standing in front of a covey of young students to confront the security and police. She was arrested picnicking on the “wrong” side of the fence with Mary Dennis and Patrick; she was arrested for blocking the road”it wasn’t because she enjoyed it. It was because she listened to her conscience. It seems if one is quiet, as Anne was, one can hear the heart’s voice more clearly.

When a number of OREPA members formed The Gathering Community to explore what it means to live nonviolently in a culture of violence, we asked for a firm commitment to attend every meeting”Anne made the commitment, joined the group, and brought her insights and compassion to the group. When we recognized some of our strong women with the Peacemaker Award, it was a no brainer”Anne joined Mary Dennis, Shelley and Lissa as honorees.

Anne’s service eventually drew her to the staff of the Diocese of Knoxville’s Office of Justice-Peace-Integrity of Creation where she had a platform to continue her witness for justice and peace. When George W. Bush came to town and the secret service fenced everyone behind a row of hedges, Anne joined Libby Johnson and Lissa McLeod in a dramatic act of civil disobedience”they crossed the street. Well, almost; they ended up stopping traffic while they were arrested. Year after year, in mid-November, Anne boarded the bus to go to the School of the Americas to protest the training of Latin American paramilitary death squads there. In 2003, she crossed the line with dozens of other Knoxvillians and 2300 other people. As they day drew to a close, an announcement came over the loudspeaker: “All the crossers have been removed from the site except for one delegation which is occupying a space inside Fort Benning”¦” Those of us waiting for our fellow travelers knew immediately it was the Knoxville group that was resisting ’til the end. Eventually, they were packed onto a bus and taken a couple miles away and dumped in a field. That determined persistence to steadfastly present herself a living witness for justice and peace was a defining part of Anne Hablas’s character.

Shortly after her eightieth birthday, Anne fell and cracked some bones in her lower back. She suffered and waited for the healing, but it didn’t seem to want to heal. Eventually her Presentation sisters called her back to Fargo. She confided just before she left that for the first time, she felt old. She went home to retire. But then, wonder of wonders, she got better! And she joined Maris Stella in the office in Fargo working for justice and peace. She organized meetings to tell people about nuclear weapons and invited OREPA to come and make presentations to religious leaders and a local college.

Two years ago, when an invitation came to OREPA’s coordinator to travel to South Dakota to address the regional Pax Christi gathering, Ralph said he was delighted in part because he would get to see Anne. It was a three hour drive from Fargo to the meeting. Then, just before the date arrived, word came that Anne’s health had taken a turn; she was bedridden, and she would not be able to get to South Dakota. Disappointed, Ralph went. And he was busy chatting with a bishop from Los Angeles when, across the crowded room, he saw a form in the doorway. It was Anne, who had pushed herself to come, as much for the reunion as for the program.

Recently, Anne contracted Parkinson’s disease, and eventually it robbed her of her strength, her muscle coordination, everything but her spirit. When word came in late September of her death, we knew it as a loss, but also as an end to suffering.