Alexander replies to OREPA: Thanks for asking

In early December, the Oak Ridge Environmental Peace Alliance sent Tennessee Senator Lamar Alexander a four page letter requesting substantive answers to sixteen questions. We numbered them to make it easier for his staff to keep track of their answers.

Our letter was part of a conversation with the Senator initiated by dozens of his constituents who wrote to him as part of OREPA’s Tell the Taxpayer campaign. We wanted answers to basic questions about the $2 billion that has been spent on the Uranium Processing Facility bomb plant slated to be built at the Y12 Nuclear Weapons Complex in Oak Ridge, Tennessee. Alexander is the guy with the answers we need because 1] he chairs the Senate Appropriations Committee’s Energy and Water subcommittee that makes the funding decisions for the UPF and, 2] he’s our Senator.

By early December, constituents had begun to hear back from the Senator. They were all receiving exactly the same form letter”it was full of assurances and devoid of any substantive information. In it, the Senator promised the UPF was on time and on budget.

In our letter, we asked for more information about that assurance”we wondered what “on time” meant, since there has been no formal plan for the UPF design approved and no schedule released to the public. Clearly, the Senator had some information that would help us understand when we might expect to see some actual return on the $2 billion tax dollars so far invested in the bomb plant.

Likewise, with the “on budget.” No budget for the UPF has been publicly released, just a baseless and increasingly silly assurance that the price will not exceed $6.5 billion. To get there, they have broken the project into pieces and eliminated big chunks of it from their core budget. Still, the design team has spent $2 billion and is not finished with the design. So we asked the Senator what budget he was looking at.

Yesterday, we got our answer. The good news: we didn’t get the same preformatted response everyone else got. Someone on his staff put some thought into the answer. The bad news: we got an even shorter letter (see it below). The result of their thinking was not, as we had hoped, a recognition of their duty to tell taxpayers what our money is being spent on; it was to double down on “trust us.”

They did, however, acknowledge in a backhanded way that the dozens of earlier responses were duplicitous”references to “on time” and “on budget” were dropped. The letter provided no information at all about the schedule for the UPF or its budget.

Getting information from the Senator has never been easy. You can’t visit his Knoxville office without an appointment; security stops you at the entrance. They won’t schedule a group meeting with us. Sometimes, we are simply referred to the Washington, DC office. There, they will not let us talk to the most knowledgeable person on the committee staff. And, since Alexander has indicated he will not run for re-election, we have little recourse to the traditional leverage one might use to insist on accountability from an elected official.

At our weekly vigil last night, one person noted that we in Tennessee are right where our New Mexico colleagues were six years ago, when their Senator, Pete Domenici, chaired the committee and the money was being sent to New Mexico to build a new bomb plant at Los Alamos. After Domenici retired, the power shifted to Tennessee, the New Mexico bomb plant got put on the back burner, and the UPF became the bomb plant du jour. Actually, the bomb plant of many jours. And many, many dollars.

The truth is we are not terribly surprised by Alexander’s failure to provide us with the information we asked for. Some of it doesn’t exist, even though he clearly indicated that it did when he was trying to deflect earlier inquiries.
We are disappointed, though. We thought there was a real chance the Senator would recognize our right to know and his duty to disclose and begin to create a transparent public record, accounting for the $2 billion already spent on the UPF and charting his expectations for the future so we could see what is coming.

And we are writing about it because we want the record to be clear. We will work to make the Senator’s intransigent position more and more uncomfortable in the months to come, but we’ll continue to hope that he will take a decision to do the right thing, come clean with the public, and shine light on the process and decisions being made about the UPF.

He won’t, though. Because laying out a plan in advance, with a timetable and a budget, sets the table for accountability. That’s more scrutiny than this project, and this Senator, can bear.

The first phase of the Tell the Taxpayer campaign”getting a hundred Tennesseans to ask their Senator for an answer”is concluded. OREPA’s Board is laying out the next phases of the campaign, and we will likely be calling on you at some point. Stay tuned! 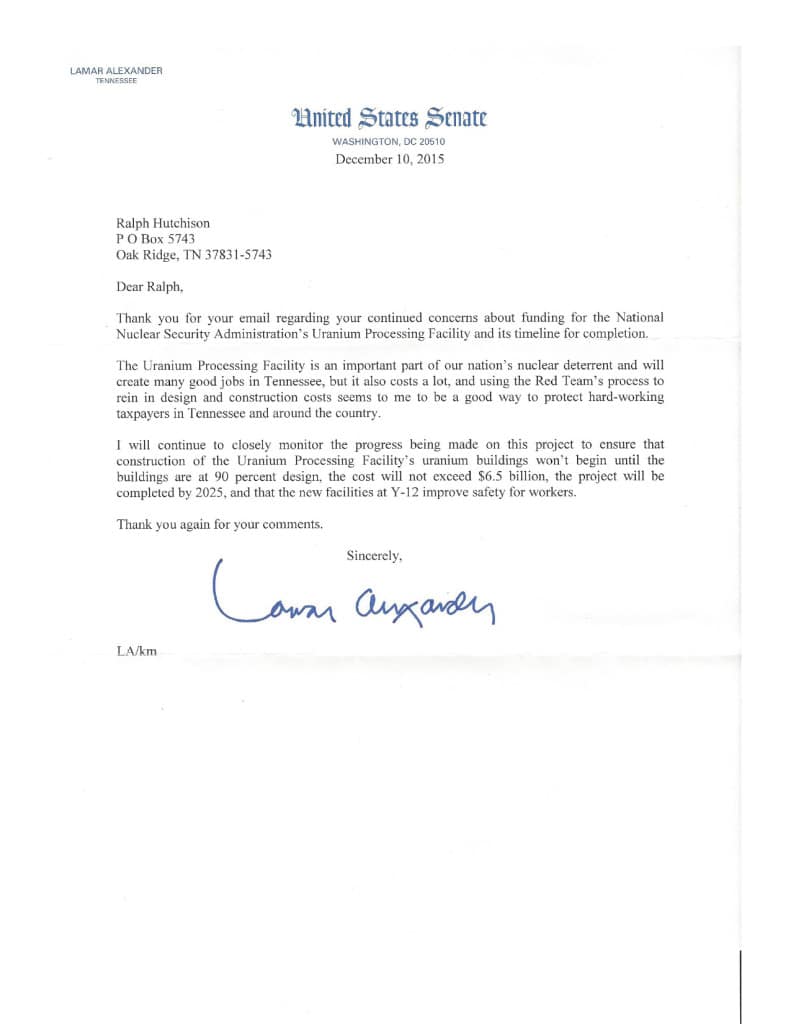