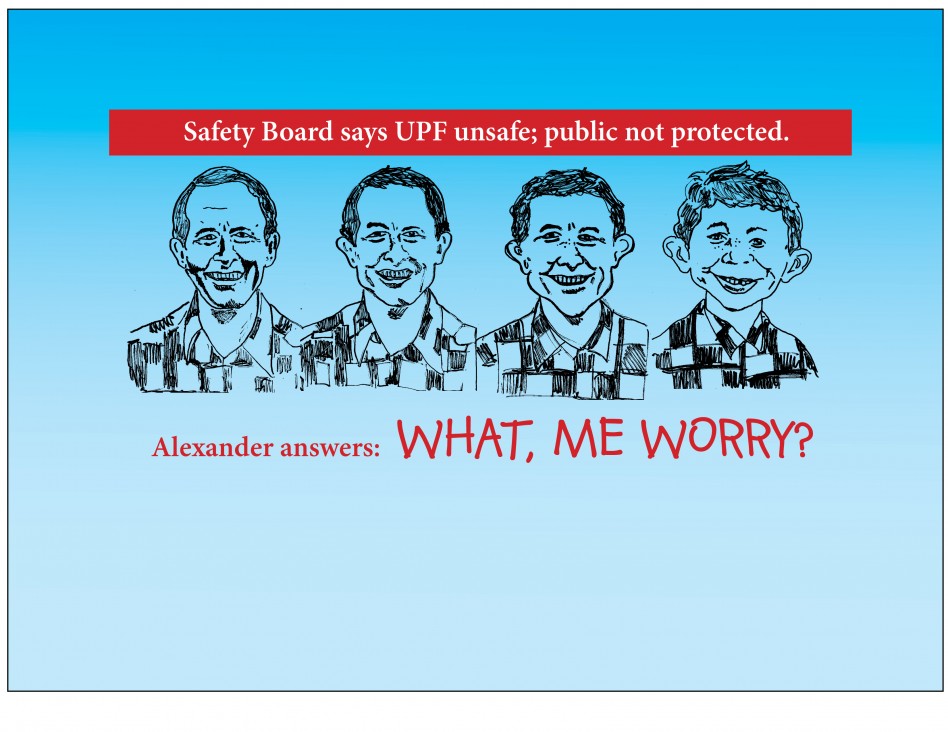 Tennessee Senator Lamar Alexander’s persistence dismissive attitude toward safety concerns raised by the Defense Nuclear Facilities Safety Board has led the Oak Ridge Environmental Peace Alliance to call for an investigation by the Department of Energy’s Inspector General’s office.

More than half a billion dollars has been spent on the design of the Uranium Processing Facility, and the National Nuclear Security Administration says it is 70% complete. But the Safety Board points out NNSA has not complied with their own safety guidance”the Preliminary Safety Design Report has not been completed.

OREPA is releasing a letter to the Department of Energy’s Inspector General’s office at 2:30pm outside Senator Lamar Alexander’s Knoxville office. “It is outrageous that Senator Alexander, after repeated requests by email and phone, refuses to meet with the public to discuss this issue,” said OREPA’s coordinator, Ralph Hutchison. “The Safety Board and the General Accounting Office are waving red flags, but no one is doing anything to slow the rush to build this bomb plant. Instead, Senator Alexander says he has sent us a response”which we have not received”and issues statements expressing his pleasure at the accelerated construction funding for the UPF.”

OREPA is asking the Inspector General to investigate to determine how much the safety design negligence will add to the total price of the UPF, already at $7.5 billion and counting, and to determine who made the decisions to ignore DOE safety Orders and the design safety requirements of DOE-STD-1189, a document that mandates early integration of safety features in project design.

“Someone made these decisions, likely to cost hundreds of millions of dollars,” Hutchison said, “and they should be held accountable. Funding to accelerate construction of the UPF should be withheld until these safety issues are fully resolved.”

OREPA’s press release is below.

What: Attempt to deliver letter to US Senator Lamar Alexander*

Who: Members of the Oak Ridge Environmental Peace Alliance

SENATOR REFUSES TO MEET WITH OREPA

Despite receiving scores of letters from constituents and repeated requests for a meeting with his Knoxville staff, Tennessee Senator Lamar Alexander, continues to refuse to meet with members of the Oak Ridge Environmental Peace Alliance. In the face of Alexander’s persistent refusal to grant an appointment, members of OREPA will attempt to deliver a letter signed by more than sixty people to the Senator’s Knoxville office this afternoon at 2:30pm. The letter calls on Alexander to put the brakes on the rush to build the Uranium Processing Facility in Oak Ridge, TN, based on the safety and fiscal concerns raised by the Defense Nuclear Facilities Safety Board and the General Accounting Office.

“These agencies, whose power is limited to raising issues, are waving red flags about the UPF,” said OREPA’s coordinator, Ralph Hutchison. “Now we need someone who will do something about it. We asked Senator Alexander to step in since the Safety Board says the current plans compromise public safety, but he has refused to get involved. Today we are calling on the Inspector General’s office to launch an investigation to answer three key questions:

1. What party or parties is responsible for the safety-design negligence that ignored DOE Orders and safety standards requiring early safety design decisions and safety integration into facility design?

2. What is the cost”in dollars”of re-design or adapting design plans to incorporate safety standards and features that are adequately protective of worker, public and environmental safety and health?

3. What is the cost”in safety”of the failure to integrate safety protections into the design of the UPF at early stages as required by DOE Orders and standards?”

OREPA’s request follows the NNSA’s admission that its planning process for the UPF failed to meet DOE-STD-1189, a standard requiring integration of safety controls early in the design process. In April, NNSA announced the UPF design process was 70% complete; in May NNSA acknowledged the Preliminary Safety Design Report is not yet complete, let along integrated into the design of the UPF.

OREPA’s letter to the Inspector General’s office cites the Safety Board’s April 2, 2012 letter which included the finding that NNSA has failed to meet STD-1189 requirements; STD-1189 builds on DOE Orders requiring early integration of safety into the design of facilities. The Safety Board requested a response in 30 days; on May 2, 2012, NNSA responded with a letter that, while admitting negligence, sought to minimize the effect of the negligence (despite the Safety Board’s documentation to the contrary) and promised a more thorough response in 60 days.

“More than half a billion dollars has been spent on designing the UPF so far,” said Hutchison, “which is mind-boggling in itself. Now it’s back to the drawing board on some fundamental pieces like ventilation systems. That means some money has been wasted. We want to know how much was wasted and who is responsible. And we want the waste to stop. It’s past time to put the brakes on this out-of-control project until we get answers”and the safety issues resolved.”

OREPA sought a meeting with Senator Alexander to deliver their letter and discuss their concerns. After repeated emails and phone calls, OREPA was rebuffed by the Senator’s staff with the assurance that Senator Alexander was replying to their concerns by mail”but no letter was forthcoming. In the meantime, Alexander released a statement celebrating the inclusion of $340 million to accelerate construction of the UPF.

“The Senator has chosen to align himself of the side of dollars instead of public safety. It’s an old, sad story, and Tennesseans deserve better from their elected officials,” Hutchison said.

* Giant copies of the letter to Alexander will provide a photo opportunity at the 2:30 gathering at the Howard Baker Federal Courthouse.

** Copies of OREPA’s letter to the Inspector General’s Office will be available at the 2:30 gathering at the Howard Baker Federal Courthouse