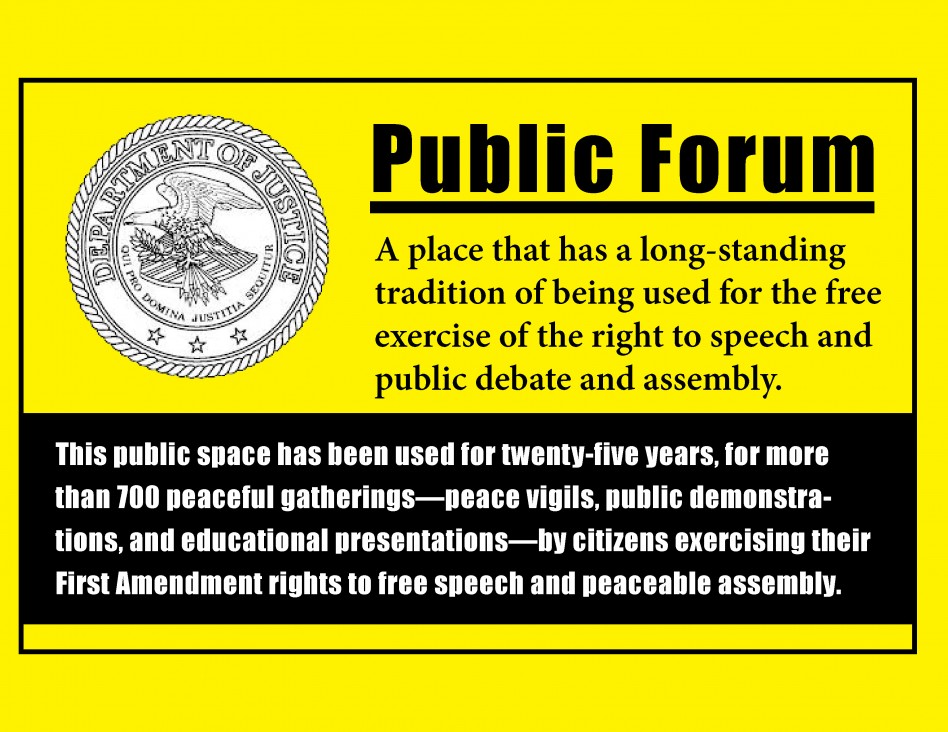 On Thursday, March 27, 2013 the National Nuclear Security Administration announced it would close off the area immediately outside the gates of the Y12 Nuclear Weapons Plant at the intersection of East Bear Creek and Scarboro Roads in Oak Ridge, Tennessee. The decision to close off the area is aimed at preventing demonstrations and peace vigils by the Oak Ridge Environmental Peace Alliance and others.

On Sunday, March 31, 2013 members of the Oak Ridge Environmental Peace Alliance will gather at 5:00pm for the weekly Sunday vigil”a gathering that has taken place every Sunday at 5:00pm for more than thirteen years.

“The Constitution says every citizen of the United States has certain rights the government can not take away,” said OREPA coordinator Ralph Hutchison, “and some of the most precious are in the First Amendment to the Constitution. These include the right to free speech and the right to peaceable assembly to petition the government. We have gathered for nearly 700 Sundays in Oak Ridge, and this Sunday will be no exception.”

OREPA noted the area NNSA intends to close off is, in fact, a public forum of long-standing tradition. “We’ve been meeting on this spot for peace vigils, public demonstrations and educational presentations for twenty-five years,” said Hutchison. “By definition, that makes this space a public forum which enjoys particular protections under the Constitution.”

Courts have ruled that citizens have a right to assemble peaceably in spaces that are determined to be a public forum. “Our rights are precious,” Hutchison said. “The exist on paper and in theory, but they don’t really exist until we exercise them. For the NNSA to attempt to squelch our free speech is outrageous”for years we have been told the whole reason for the bombs they make in Oak Ridge was to protect our freedom. If this were not a serious attack on our First Amendment rights, the irony would be delicious.”

In announcing its intention to construct a $95,000 temporary barrier by Thursday, April 4, just two days before the April 6 peace demonstration scheduled by OREPA, the NNSA noted the long-standing gathering place is highly visible. They have proposed forcing the public to gather in a less visible place where they will be required to request permission, pay fees and secure insurance.

“In twenty-five years, we have never had an incidence of violence,” Hutchison noted. “There has never been even the slightest hint of a threat to the bomb plant. Our goal has always been to create the public record of opposition to weapons of mass destruction, to witness for peace and life, and to call the United States to live up to its promise under the Nonproliferation Treaty. Now, they can’t bear to let us speak; they want to move us away from the public eye, put us behind a fence, and charge us a fee. They say it is in the name of security, but their motives are transparent. They want to stifle free speech, or at least render it ineffective.”

The NNSA has indicated the temporary fence will serve only until a permanent barrier can be constructed; the estimate for the second barrier is $150,000.

The current security fence at Y12 is a three-strand barbed wire fence running along the legal boundary of the facility, half a mile or more from the weapon production facilities at Y12. No security threat has ever been launched from the Scarboro Road boundary.

“We completely agree the current barbed-wire fence is not sufficient to deter entry,” Hutchison said. “We’ve said that before. We think the barrier should match the barrier that extends around the plant perimeter in the more heavily wooded areas. We also believe the barrier should be located on the legal boundary, replacing the current barbed-wire fence. To move it sixty yards, out to the roadside, just to eliminate our public forum is not only illegal, it is nonsensical and astonishingly expensive.”

The proposed new barriers, temporary and permanent, will have no impact on traffic into the Y12 plant which passes across the plant boundary and into the Y12 facility more than 1/10 of a mile before reaching a lightly staffed checkpoint.

“If they were serious about security, there are a number of things they could do that would actually make the place more secure, starting with traffic control and moving on to clearing sightlines of brush.” Hutchison noted. “Moving the fence out to the street is not in the top ten.

“And if they really want to increase security for all of us, they would stop building the bombs. We could show the kind of leadership the president has committed us to”because the only way we’ll truly be secure is when no one, including us, has nuclear weapons.”